A large company displays strength in depth in a production which sets commendably about the task of stressing the fun in this familiar work.

The principal’s line-up is full of pleasing voices. The happy central pairing of Sally Ann Davis and Michael Faulkner is strongly supported by J Barrymore Lee (Alfredo), Kevin Hirons (Falke), and Barbara Hall, who is a sparkling minx as Adele.

J Barrymore Lee’s production has intermittent problems with the theatre’s bad sight lines. Bob Taylor’s delightful drunken cameo as Frosch does not escape this problem, which is a pity.

In October I spent a very enjoyable evening in the Palace Theatre, Redditch where the Redditch Operatic Society were presenting Die Fledermaus.

A well produced and musically directed show. Perhaps a little lacking in pace at times, but the singing of the principals and the chorus well made up for that.

As usual with this show it over-ran slightly and I feel it would have benefited from some judicial cutting in places. However the portrayals of Eisenstein, Adele, Rosalinda, Alfredo and Falke were most convincing.

Our 30th Anniversary Year production, Die Fledermaus began with a shaky start when we lost the services of our first producers. Nevertheless, once Barrymore Lee had joined us both as director and to play the part of Alfredo, things looked up.

Since it was a special year, we took the unusual step of letting the company vote for the show they most wanted to perform. One evening at rehearsals for our previous production, we presented a synopsis and played a selection of songs from four shows that seemed the most popular to the company. Then, the whole Society voted for their favourite out of the four. Die Fledermaus, won hands down.

We had very good audience numbers for the week, and the company enjoyed the opportunity to do some ‘proper’ singing in an operetta rather than a musical play.

When Gabriel Eisenstein (a likeable gentleman of independent means, but an incorrigible philanderer) pushes his friend Dr Falke into a fountain on their way home from a fancy dress ball, Dr Falke (dressed as a bat) is determined to one day get his own back. This is the story of the ‘Bat’s Revenge’…

Act I – The Eisenstein House

Whilst Gabriel is in court being sentenced to eight days in jail for prodding a policeman with his walking stick, his wife, Rosalinda, is being serenaded by Alfredo, an old flame, who only promises to leave if she allows him to return once Gabriel is locked up. The court allows Gabriel an hour to return home and bid farewell to his wife, and they both pretend devastation that they are to be parted, watched over in amusement by Adele, the house maid. Before Gabriel leaves, Dr Falke arrives and persuades him to attend a party that evening instead of going to prison. Gabriel decides to go dressed as a French Marquis so he will not be recognised. Adele also gets an invitation to the party from her sister Ida, and under Dr Falke’s instigation is to pretend to be a famous actress. Once Gabriel has gone, Alfredo reappears and is just about to take Rosalinda in his arms when Frank the Prison Governor suddenly arrives in order to escort Gabriel away. To save Rosalinda’s reputation, Alfredo pretends to be her husband and is thus taken away to be locked up.

Prince Orlofsky, a Russian millionaire, enjoys throwing lavish parties but professes that he has forgotten how to laugh. Dr Falke promises to relive his boredom with an amusing comedy. In turn, the players in the game arrive – Adele (pretending to be Olga, of the dramatic academy), Gabriel (as the ‘Marquis de Renard’) and Frank (who has been persuaded by Dr Falke to assume the guise of a French Chevalier). Much flirtation ensures between Ida and Frank, Adele and Gabriel, and is only interrupted by the arrival of a mysterious masked countess. Gabriel, who cannot resist a challenge, is immediately attracted to this stranger and turns his charms in her direction. Unfortunately for him, she is none other than his wife, Rosalinda. During the flirtation that ensues Gabriel tries in vain to get the lady to unmask, but to no avail. Rosalinda, whilst playing along with him, is furious as she discovers her husband’s true character. Finally, as the clock strikes six in the morning, Frank and Gabriel, now firm friends (and still not knowing each other’s true identity), suddenly remember that they must be elsewhere, and stagger drunkenly off to jail by two different routes.

In a sorry state, Frank arrives back at the prison. Soon Adele arrives to confess her deception and to persuade Frank to make her his protege. Next comes Gabriel to give himself up, and mutual recognition brings out the full facts of the night before. It also becomes obvious that Alfredo has been mistakenly arrested. On finding out that Alfredo and Rosalinda were together, it is now Gabriel’s turn to play the outraged husband, and threatens Rosalinda with divorce, until she proves that is was she with whom he was flirting the night before. Finally, Dr Falke and Orlofsky arrive to sort out the mess. Adele persuades Frank to suspend the prison sentence, and then chooses to become the protege of Prince Orlofsky. The scene concludes with everybody full of forgiveness and singing the praises of his majesty – King Champagne. 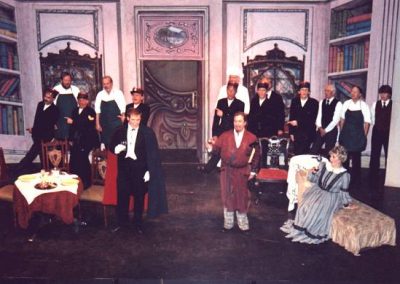 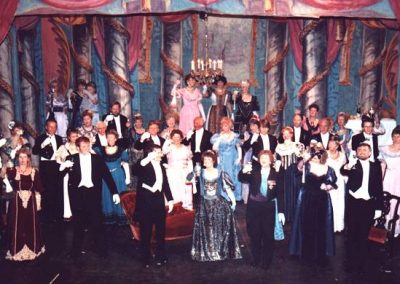 The party at Prince Orlofsky’s villa 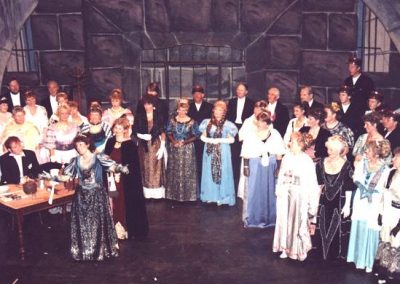