No deadwood to be found on this one!

The hits outnumber the misses in Pam Harley’s production of this popular Western musical. A large, colourfully dressed cast filled the stage well-blessed with props.

There were a few hesitant spells among performers and a long delay between scenes. Alan Hirons (Fryer) was among those who occasionally found difficulty penetrating the musicians ‘sound barrier’.

A robust performance by Loraine Wainman in the tomboyish title role kept Deadwood City alive and active. Her appearances are alternating with understudy Tracy Rees after she impressed Harley at auditions.

A massive cast belted out the classic ditties – including The Deadwood Stage, The Black Hills Of Dakota, Careless With The Truth and, of course, Windy City. The story is as well-known – and as well-loved as the songs and was certainly a very popular choice.

Loraine Wainman stepped in Calamity’s ‘cowgal’ boots to take the lead role with great gusto. Her voice filled the auditorium and every word was crystal clear. Credit must also go to Jack Brennan as Henry Miller, Keith Williams as Wild Bill Hickock and Alison Kift as Katie Brown.

And a beautiful set, designed by James Fredricks, helped add a very professional touch to a good evening’s entertainment.

Angry shots were fired at the stage of the Palace Theatre last week, but they were not comments from the audience, it was the guns! It was all part of an excellent performance of Calamity Jane from the Redditch Operatic Society.

It was the turn of Tracy Rees to climb into the deer skin and shoot about a bit. It is a simple story of a cowgal who is trying to be a man, with over-exaggerated stories of bravery, but she is in love with Lt Danny Gilmartin, and also likes the famous Wild Bill Hickock.

The story centres around the bar of The Golden Garter, where bar owner Henry Miller tries to get sexy international star Adelaide Adams. Tough Calamity promises to get her, but brings back her assistant, Katie Brown, who is looking for stardom, instead. Katie turns Calamity into a ‘real woman’, but Jane’s love, Lt Gilmartin, wants Katie not Jane. But it ends happily ever after when Calamity marries Bill Hickock, Katie hitches up with Lt Gilmartin.

This was a very good performance by Redditch Operatic Society, and whipcracking fun with striking sets, where Barrie Cole gave a superlative performance as Rattlesnake.

This production, the only one by producer Pam Harley, had its fair share of troubles throughout its run of rehearsals. Happily, few of these were apparent on stage – proved by good reviews from our audience and the critics alike.

This was the last time that we were able to perform a six-night run starting on the Monday evening. All productions after this date had to start on Tuesdays due to constraints on our time at the theatre for setting up and the dress rehearsal.

Audience figures were excellent – well over 90% of all seats were sold for the six performances, testimony to the continuing popularity of the show and, no doubt, of the film starring Doris Day and Howard Keel.

There are only nine principal roles in the show and, unusually, very few smaller parts that can be taken by members of the chorus. Still, there’s plenty for the chorus to do, and full use was made of choreographer Lesley Stocker’s dancers. This is a show that could be performed well by a smaller company.

The year is 1876 and Calamity Jane tries to hold her own in a man’s world, but she’s head over heels in love with Lt Danny Gilmartin, and although she would not admit it, she kinda likes Wild Bill Hickock, too.

When the customers of the Golden Garter cause a near riot on getting a female impersonator instead of an actress, Calamity decides to go to Chicago and bring back the world-famous Adelaide Adams.

Instead, Calamity returns with Katie Brown who is a disaster at impersonating Adelaide, but soon becomes a huge hit as herself, and moves in with Calamity.

At the Fort Scully ball, however, Calamity flies into a rage when she sees Danny and Katie kissing, and orders Katie out of Deadwood. All ends happily, though, when Calamity then finds that her real ‘secret love’ is none other than Bill Hickock…

Adapted by Ronald Hanmer and Phil Park from the stage play by Charles K Freeman after the Warner Brothers film written by James O’Hanlon.
Lyrics by Paul Francis Webster. Music by Sammy Fain. 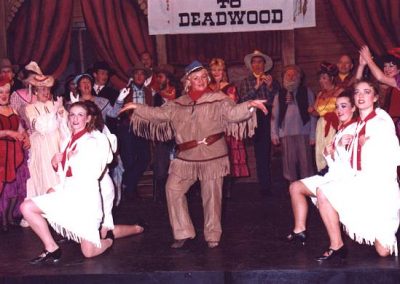 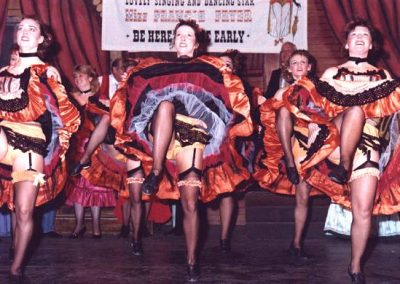 The Woodlands School of Dancing 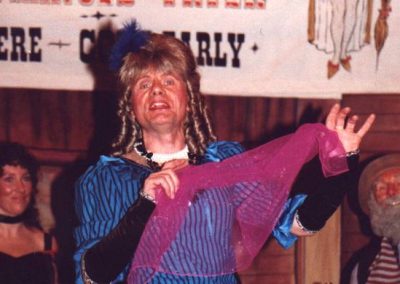 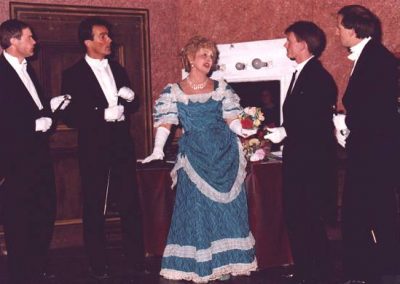 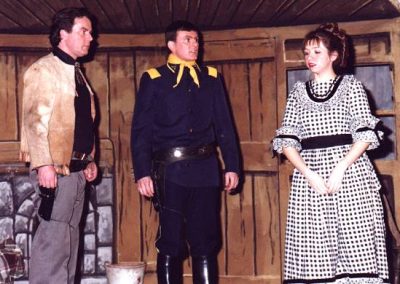 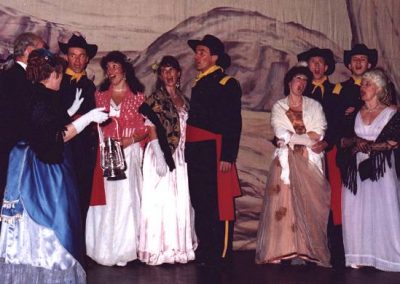 The Black Hills of Dakota 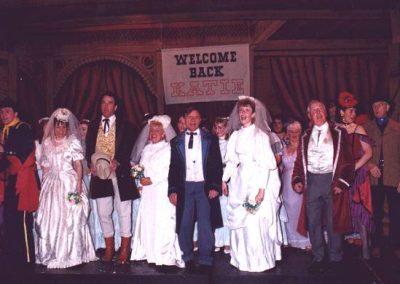