Redditch Operatic Society took over the town’s Palace Theatre with a lively performance of The Pajama Game. Fifties America was faithfully recreated in costumes and sets, and chorus members had obviously worked hard on the many changes of scenery.

The Sleep-Tite pyjama factory workers provided an able chorus for the many soloists. I particularly liked Mabel (Brenda Cooper) and the ebullient Tony Jay as Hines in their song and dance routine I’ll Never Be Jealous Again. And Alison Kift was just daffy enough as flirtatious secretary Gladys.

The only slight disappointment of the night was the audience’s desire to talk loudly over the entire overture.

The Redditch Operatic Society presented a well-rehearsed and professional performance of this smash hit musical comedy. Society members worked with enthusiasm and skill to entertain the near-capacity audience.

The flirtatious Gladys was played excellently by Alison Kift, her character being everything you might expect from an American secretary. Her jealous boyfriend, Hines (Tony Jay), added humour with his knife throwing act.

The show displayed an excellent standard of acting and dancing as well as singing. Special lighting effects, like the torches at Hernando’s Hideaway, added to a thoroughly professional image.

Unfortunately, the orchestra lacked dynamic variation and consequently drowned out some singers whilst not being loud enough to support others. The finale was highly humorous, and the not-so-delicate Mae carried a very appropriate Pudsey Bear.

The first, and only, production of life member and long-time leading lady Jean Leadbeater – The Pajama Game (note the American spelling, it’s not a typing mistake!) was another good choice for the Society.

It has six major and eight secondary principal roles, with lots of fun songs for them and the chorus to enjoy. The show also marked the debut for ROS of two ladies who would continue to play principal roles over future years – Julie Keeley and Liz Bird.

Unusually for us, we added a Saturday matinee performance to the usual five-night run. Unfortunately, the audience for the afternoon seemed to be outnumbered by the bodies on stage, teaching us a lesson on when and when not to opt to do matinee’s (the next time after this was for the hugely popular Me And My Girl in 1998 – and that one did sell!).

Fortunately, the rest of the week’s audience figures were more than acceptable, and good press and audience reviews were received for the production.

Despite the best efforts of Sid, the new factory superintendent, a strike is looming at the Sleep-Tite pyjama factory in Cedar Rapids, Iowa. Prez, the president of the Union, is seeking a wage rise of seven-and-a-half cents an hour, but old Mr Hasler, the boss, steadfastly refuses to consider the increase.

Hines, the time-study man, is also concerned about the moral of the workers, especially when their work rate suffers, but his is often more worried by the imaginary flirtations of his girlfriend Gladys, who is Mr Hasler’s secretary.

When Sid loses his temper and pushes one of the more troublesome workers he encounters Babe, the head of the grievance committee. Despite their initial differences, a romance soon develops between them, and progresses further at the company picnic, where Hines stages his infamous knife throwing act, and Prez flirts with Gladys, Brenda and Mae in turn.

Back at the factory a go-slow is staged by the Union. This horrifies Hines, and he fetches Sid who, as factory superintendent, demands an honest days work from everybody and threatens to fire any slackers. Babe is enraged by his attitude and kicks the machines, causing a general breakdown, thus forcing Sid to fire her immediately.

The slow down continues, and Mr Hasler and the company salesman are shocked to find that the workers begin to sabotage the pyjamas. Meanwhile, Sid becomes increasingly aware that Babe’s championship of the Union may be justified and he simulates an interest in Gladys who holds the key to the company ledgers. They go to the local night-club, Hernando’s Hideaway, where Gladys gets drunk and gives him the key.

Hines discovers that Gladys is out with Sid and, drunk and jealous, he beings throwing his knives around again in an effort to scare everybody. Sid’s idea to examine the company books, however, pays off when he discovers that the boss has already been adding the pay increase demanded by his workers to the price of the pyjamas. Armed with this information Sid insists Mr Hasler gives the workers their pay rise, and everybody is finally happy when they win their extra seven-and-a-half cents an hour… 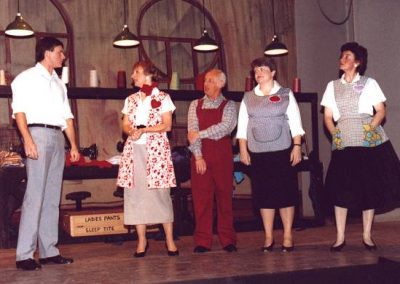 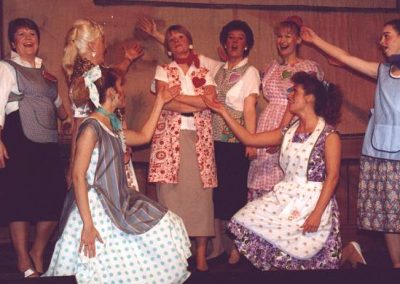 I’m Not at All in Love 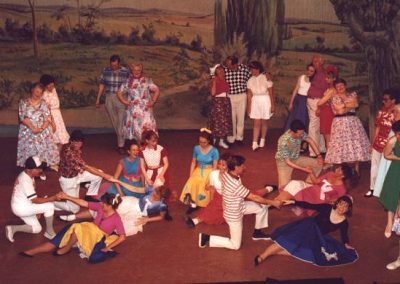 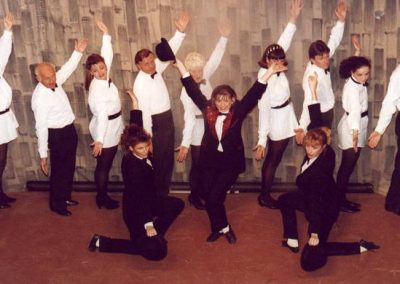 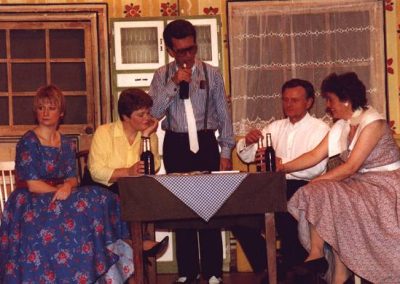 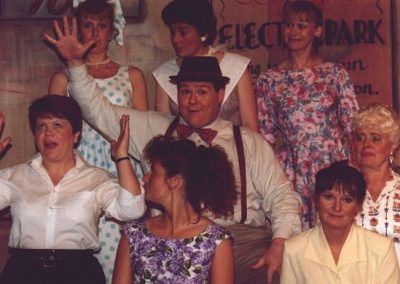 Think of the Time I Save 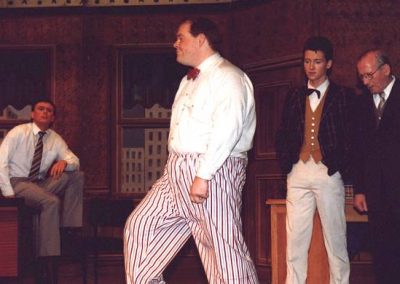 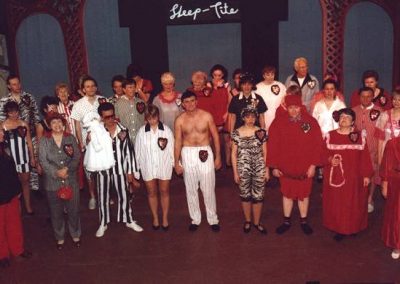