Strong on the comedy side and having a fire cracker of a leading lady, Ian Thompson’s production generally gives an excellent account of this Cole Porter show.

Elizabeth Bird gives Reno a sparkling, bright-eyed vivacity in an often spellbinding performance, despite the uncertainties of the first-night sound system. She’s funny, too – and in splendid comic company with Julian Wilson (Moonface), Tony Jay (Lord Evelyn) and Barbara Hall (Erma), with further chucklesome support from Alan Hirons as the Purser.

Kevin Hirons is a strong and attractive Billy and Alison Adams a gently effective Hope. The production has attractive dancers – but I don’t think a uniform sailor on a liner would allow himself to be seen putting an arm round a lady passenger. Musical direction is by Norma Kift.

Redditch Operatic Society showed what a class act they are with their latest production, a big, smiling, ship-bound song and dance extravaganza.

With a story originating in the fertile mind of PG Wodehouse and tunes courtesy of the god-like genius of Cole Porter, you might think its hard to put a foot wrong. But the playing has to be as light as a soufflé, the timing as precise as an atomic clock, and it’s all to ROS’s credit that they pulled the whole thing off with aplomb.

Elizabeth Bird was a sassy Reno Sweeney (Ethel Merman would be proud), the night-club singer with a heart of gold trying to stop two would-be sweethearts getting into troubled waters. And male lead, Kevin Hirons shone as Billy Crocker, a singing, swinging straight-man funny-man with oodles of vim and verve.

Special mentions too for Julian Wilson as grouchy gangster Moonface Martin, a tommy-gun toting ne’er-do-well desperate to get in the Public Enemy top ten list and Tony Jay as a squealing English Lord getting to grips with Americanisms.

And those songs! The whole cast clearly relished the chance to share the magic of Porter’s effortlessly witty, springing, rhythmic words. One corker followed another – I Get A Kick Out Of You, You’re The Top, Blow Gabriel Blow and of course the title tune, a bold celebration of the new world gone wrong.

The £10,000 budget seemed to be all up on stage, and the phrase ‘amateur theatre’ just doesn’t do ROS justice. An absolute blast.

Elizabeth Bird could not have tackled fate better. Elizabeth came up against the door that would not move on the first night of the Redditch Operatic Society production of Anything Goes. She was supposed to open it to enter the three-sided ship’s cabin which had been placed on the stage at the Palace Theatre, Redditch.

She pushed. She pulled. The door ignored her. And at that point, Elizabeth – sparkling uninhibitedly in the role of Reno – showed it who was the boss. Giving the audience a big beam and spreading her arms in a palms-up shrug, she gave up the struggle – and entered the cabin by walking briskly round the door and through the missing front wall.

It was a classic example, precisely on the lines I suggested two weeks ago, of how to deal with inanimate objects which suddenly show a will of their own. You don’t pretend that nothing has happened. You do what is necessary and then get on with the show. And the audience loves you for it.

Cole Porter’s show stopping musical was an excellent choice for this very versatile society. After seeing Julian Wilson playing such a sinister part as Sweeney Todd in their last production it was great to see him play a comedy role such as Moonface Martin so very well.

All the principals without exception were on top of their parts and there was so much in this production with good singing, costumes, sets and lighting that it is difficult to say what I enjoyed most. An overall excellent show. Thanks again for the cheerful welcome and hospitality.

At the time, our biggest show to date. We really pulled out all the stops for this one, with superb costumes and scenery and an excellent orchestra to do justice to Cole Porter’s classic songs.

Most of the action is set on the deck of the SS American ocean liner on a voyage from New York to England in the 1930’s. Other scenes are set in cabins, which slide on and off stage very cleverly.

There are eight major characters, another six or so minor characters, four show girls, and plenty of opportunity for the rest of the chorus to shine in this gem of a show. No wonder, then, that we all enjoyed the whole week so much.

The five night run was well supported by the Redditch audience, and the reviews we received were excellent. After this, we decided to have a go at another Cole Porter show – Kiss Me Kate a couple of years later, but we think it’s this one that’s got all the real classics!

Billy Crocker, the young assistant of tycoon Elisha J Whitney, has fallen in love with beautiful American heiress Hope Harcourt who he met one evening at a party. Unfortunately, Hope is sailing to England on the SS American ocean liner with her English fiancé Lord Evelyn Oakleigh, and her mother Evangeline. When Billy finds out, he stows away on board, trying to persuade Hope not to marry the silly Lord Evelyn.

The official passenger list also includes Elisha Whitney, a Minister, reporters, photographers, and two Chinese converts, but no celebrities after Charlie Chaplin cancels his trip, much to the chagrin of the Purser and the Captain.

Also on board is Reno Sweeney, the sexy ex-evangelist turned night club singer, who is providing the entertainment on the cruise. Reno, who is an old friend of Billy, is delighted to find him here, and mistakenly thinks he has come to spend the trip with her. To remain undetected by both the crew and his own boss, Billy, now teamed up with Moonface, has to adopt numerous disguises or hide in the ship’s cabins.

The Captain has been warned by the F.B.I. that Snake Eyes Johnson is on board, but he mistakenly believes it is Billy. When Billy is finally captured by the Purser and the crew, the Captain, who is delighted to finally have a celebrity on board, makes him the honorary Captain of the SS American rather than having him arrested.

Billy professes his undying love to Hope, but she is torn between her attraction to him and her vows to Lord Evelyn. Evelyn, however, is very taken with Reno, who he once saw at her club where her singing ‘stirred him to a frenzy’, and to whom he confesses the Oakleigh family’s dark secret. Hope’s mother, Evangeline, also teams up again with Elisha Whitney, who she hasn’t seen for forty years.

The scene is all set for a wedding on the ocean wave, although both Hope and Evelyn separately come to the conclusion that they don’t really love each other. But how can Billy stop the wedding without causing chaos, and where does all this leave Reno?

By arrangement with Musicscope, London. 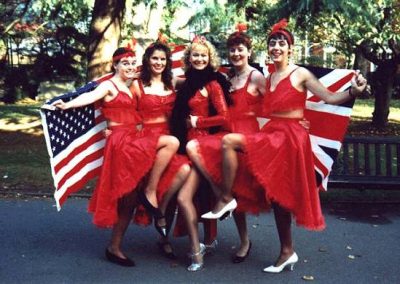 Reno Sweeney and her Angels 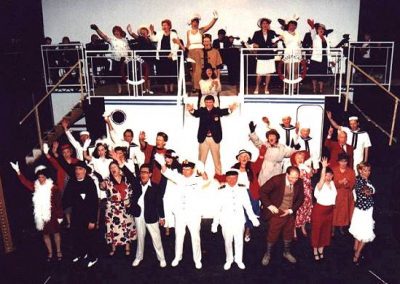 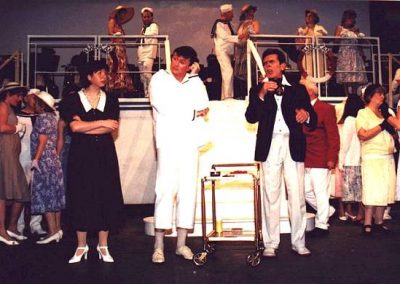 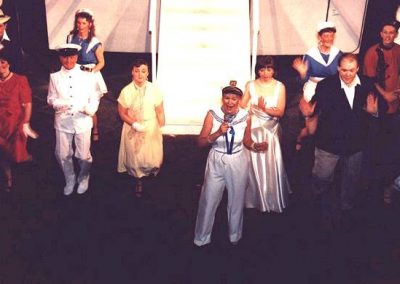 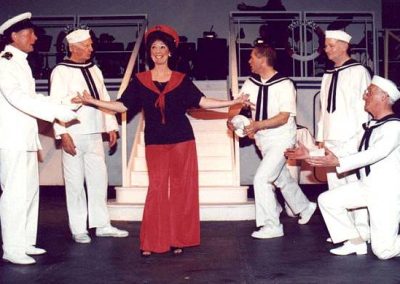 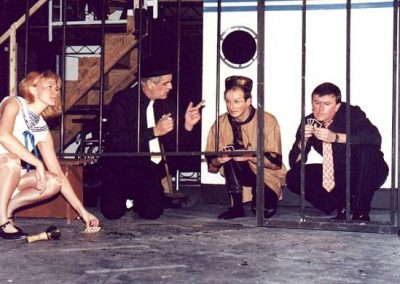 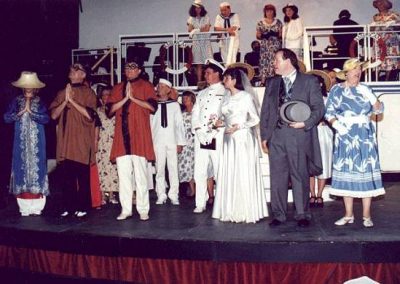 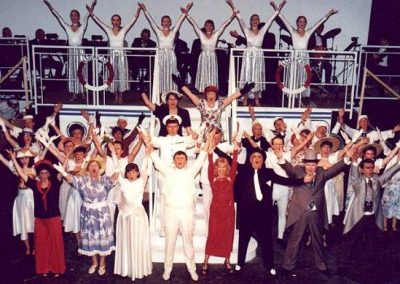