The World of Sweeney Todd

This is another enjoyable and entertaining production from this prodigious and talented company. It would be all too easy to unfavourably compare this production to last year’s out and out romp, Orpheus In The Underworld. Totally wrong, as the two productions are quite different.

From the moment you enter the Palace Theatre, that difference is strikingly apparent, with cast members (replete in Olden Day dress) there to greet you. It is a great way to start a production which transports the audience back through time to the seedy side streets of London. And the dirt and squalor continue with the arrival of Sweeney Todd – a Fleet Street barber of dubious repute, keen on ‘polishing off’ his customers – and his partner, Margery Lovett (Pauline Read), maker of pies with real ‘body’.

The Society is blessed with some strong players, in particular Julian Wilson brought a cold, calculating menace to the barbaric barber, Tony Jay was a jolly Salt Sea Jack and Barrie Cole was hysterical as the righteous Dr Lupin.

As ever there were plenty of neat comic touches (some brilliantly gruesome) and musically speaking there was nothing really to grumble about (though the strongest numbers were the ones with lots of cast members).

All in all, The World Of Sweeney Todd does not diminish Redditch Operatic Society’s quality reputation.

Redditch Operatic Society have put on another top notch performance at the Palace Theatre for their Spring production. The spectacle began in the foyer as the cast, dressed in Victorian costume, greeted the audience in true Cockney fashion.

The players put on a great performance as they worked their way through the sleazy world of the notorious London murderer. Special mention must be made for Barbara Hall for her wonderful, over the top performance of Seraphina Scrubbs, she was funny and sympathetic at the same time.

And don’t forget the great performance by Julian Wilson, the evil Sweeney Todd. Cast members sneaked into the back of the theatre when not on stage, and encouraged hisses and boos from the audience. Some of the solo song numbers could have been a bit louder but all of the leading actors did have good voices.

The evening was polished performance, from the programme, designed as The Fleet Street Bugle, to the costumes and scenery the hard working group have designed. After 35 years of previous plays I expected the cast to do well and was not disappointed.

The Society first performed this show in 1978, and had such a good time, that we decided to revive it as a spring show – with a slightly smaller company and budget than our usual autumn productions.

The show is not a ‘normal’ professional work – having been first performed in Newcastle in 1962, and written by members of the People’s Theatre. It was revised in 1970, and apart from a number of performances in the 70’s is rarely performed. In fact, the composer, Mr Peter Stattersfield, was so surprised and delighted that anybody had remembered his show, that he travelled all the way from Newcastle on Saturday 29 April to see our production for the first time in years. He was delighted with our interpretation.

There are eleven main characters in the play, all of similar scope except, of course, for the principal pairing of Sweeney Todd and his side-kick Mrs Lovett. Julian Wilson, who played the title role in the original 1978 production, returned to the role with great effect (see reviews above).

We invited the audience to come dressed in Victorian garb, attempting to create a ‘Good Old Days’ kind of event, and encouraged them to participate by booing and hissing the villainous acts on stage.

And the scenery, including a raised barber’s shop complete with a chair that span round and dropped Sweeney’s victims through the floor and down a chute, helped put the polish on a very enjoyable production.

Scene 2 – The Vaults of St. Dunstans

Book and lyrics by William Scott and Ken Appleby. Lyrics by Alan Collis and Mike Burke.
Music by Peter Stattersfield. Arranged by Alan Johnson.
First performed by the People’s Theatre in Newcastle upon Tyne in May 1962. Revised and re-presented in 1970. 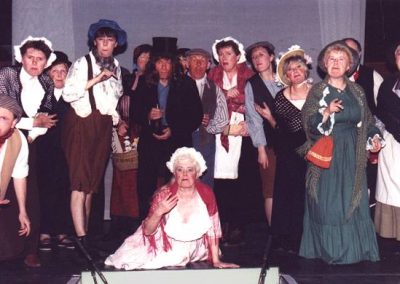 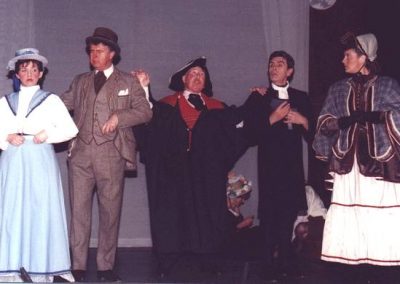 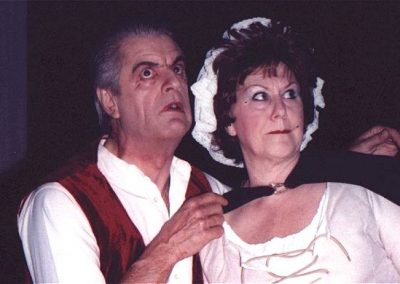 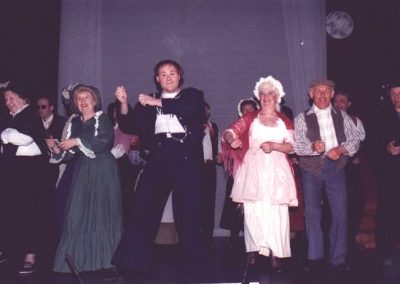 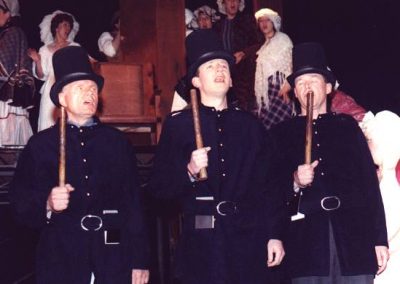 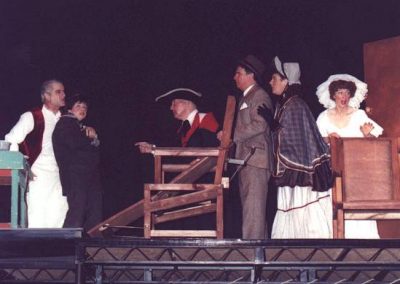 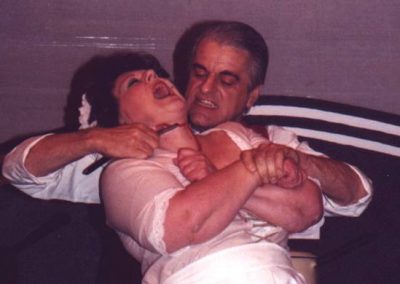 The end of Mrs Lovett 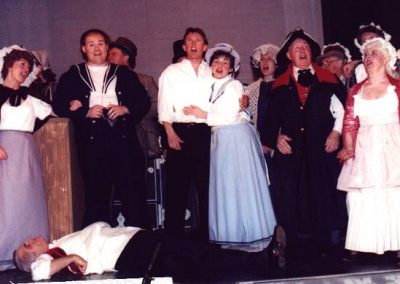 In the World of Sweeney Todd