Annie Get Your Gun

Yet another successful performance

Redditch Operatic Society has pulled off yet another successful performance with Annie Get Your Gun at the Palace Theatre. The Irving Berlin comedy musical tells the story of Annie Oakley, played by Tracy Rees, a sharp-shooting hillbilly who becomes the star attraction in Buffalo Bill’s Travelling Wild West Show.

Tracy Rees and Tony Lacey were excellent as warring couple Annie and Frank Butler, with Mark Williams and John Baker in fine voice as the show’s manager Charlie Davenport and Buffalo Bill.

The costumes were bright and eye-catching and the whole cast did a great job. Those with speaking parts were very convincing in their American accents and managed to keep them up throughout the whole performance.

Annie falls for champion marksman and ladies man Frank, who she competes against in a shooting contest. Frank’s feathers are ruffled when he loses, but he falls for Annie and she is offered a job as his assistant. Annie has secretly been working on a show-stopping motorcycle stunt in the hope Frank will be so impressed he will propose. But Buffalo Bills’ rival Pawnee Bill sets up his show in the same town and Annie is forced to perform the trick to save Buffalo Bill from bankruptcy. She steals the show and Chief Sitting Bull is so impressed he offers to back Buffalo Bill, but Frank is not happy and goes to work for Pawnee Bill. Eight months later he and Annie fall in love again when they meet at a party – until the question comes up about who is the best sharp-shooter. They order another contest to take place and Annie ends up winning her man.

Irving Berlin’s ever popular show proved to be a sell-out success and probably made more money than Buffalo Bill and Pawnee Bill put together.

A live-wire, full throttle performance by Tracy Rees ‘Annie Oakley’ was not quite matched by Tony Lacey’s rather camp ‘Frank Butler’ but Mark Williams ‘Charlie’ and John Hall ‘Chief Sitting Bull’ were excellent.

Costumes and scenery could have been more colourful and the production lacked the energy and zip to be memorable. However, it was a most enjoyable evening and was much appreciated by an enthusiastic audience.

Everybody in the company and crew really enjoyed this show – it was an excellent, and very happy, week for all concerned.

Bev Hatton, a long-time member of the Society, had been assistant producer for our previous two shows, Me And My Girl and Kiss Me Kate. This was her first time in charge, and she produced the show to great effect, ably assisted by Tony Lacey.

Tracy Rees took the leading role of Annie Oakley – her other leading role with the Society also having a western theme since she first joined us for Calamity Jane in 1992. There are ten other principal parts, and a small handful of minor roles, along with many chorus scenes and numbers for the whole company to enjoy. In fact, due to the way Bev and Tony produced the show, the chorus was kept very busy throughout the whole evening.

The five night run did very good box office business, with performances on Thursday, Friday and Saturday being sold out, or as good as. Audience reaction was 100% complimentary.

For the first time in many years, the Society might even make a little profit on this production (we usually spend more on a show than we can ever recoup from ticket sales), even though no expense was spared on orchestra, sets and the splendid costumes.

As the show opens we see the arrival of Buffalo Bill’s Travelling Show in Cincinnati, near Foster Wilson’s boarding house. Excited crowds gather to hear about the show, but their tickets, and to meet the famous Buffalo Bill.

Charlie Davenport, the show’s manager, issues the challenge of a shooting contest between the show’s star sharp shooter, Frank Butler, and any of Cincinnati’s local sharp shooters – with a grand prize of $100. Frank, who has a reputation as a ladies man, meets some of the local ladies as he tries to persuade Foster Wilson to find someone for him to shoot against.

Wilson, however, is not convinced about the shooting contest until the arrival of a young girl, Annie Oakley, and her family who have come to sell him some game birds that she has shot. He realises that Annie has great potential with a gun and he persuades her to enter the contest. Not long after this, Annie meets Frank Butler for the first time, not realising that this is the person against whom she will be shooting. Annie soon falls for Frank in a big way, but Frank doesn’t let on who is he. Annie asks him to stay and bring her good luck but he excuses himself and goes to get ready.

When the shooting contest is ready to start Wilson introduces Annie as his chosen sharp shooter. Everyone laughs at the suggestion, but Buffalo Bill insists that the contest must go on. When Frank is introduced to the crowd, Annie is taken aback to see that he is her competition. The shooting contest begins and for a while it looks as if it will end in a draw, but suddenly and surprisingly Frank misses a shot, and Annie is the winner.

Both Buffalo Bill and Charlie Davenport see Annie’s potential as a crowd-puller and they offer her the chance to become Frank Butler’s assistant, which she accepts. And so Annie and her family join Buffalo Bill’s show. Some time later it is clear that Annie and Frank have fallen in love as they have continued to work together and Annie hopes that marriage is in the air.

When the show arrives in Minneapolis it is discovered that Buffalo Bill’s rival, Pawnee Bill, has opened his show nearby. This is a disaster as Buffalo Bill’s show is already heading towards bankruptcy. Annie is persuaded by Bill and Charlie to perform the special trick she has been working on, which they believe might save the show.

Buffalo Bill takes his show to Europe where Annie plays to all the crowned heads. They don’t make much money but Annie receives many medals. They return to New York broke, only to learn that Pawnee Bill’s show is playing at Madison Square Gardens. Pawnee sends a messenger to invite them all to a party he is holding and they all decide to attend with the idea of getting the shows to merge together. Annie relishes the chance to see Frank again. At the party it becomes obvious that Pawnee Bill’s show is also struggling and he too wants the shows to merge.

Annie eventually meets up with Frank again and love blooms once more, that is until the question comes up again of who is the best sharp shooter. Annie and Frank fall out immediately and order another shooting contest to take place.

On the ferry boat to Governor’s Island, where the competition is to take place, Dolly Tate, Frank’s assistant, tries to tamper with Annie’s guns so that she will lose the contest. She is discovered by Charlie and Chief Sitting Bull who agree that this is a good idea.

On Governor’s Island the competition is about to start. How will it end? Will Annie win the contest again but lose Frank forever, or will she lose the contest and win her man?

Music and Lyrics by Irving Berlin.
Book by Herbert and Dorothy Fields.

By arrangement with Samuel French Ltd. 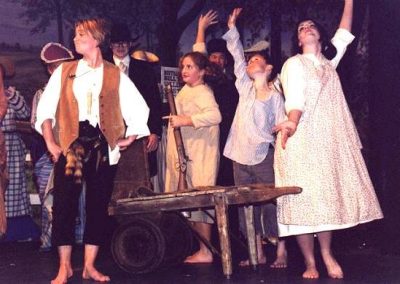 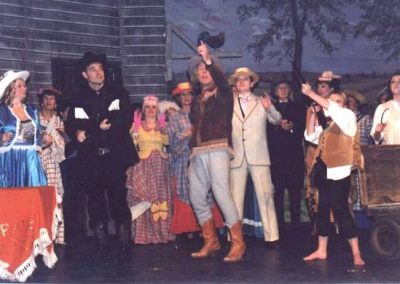 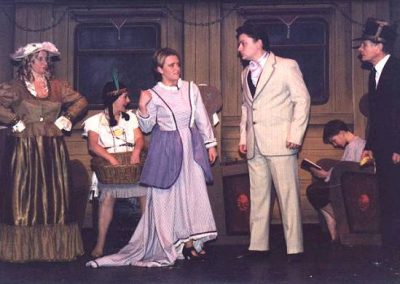 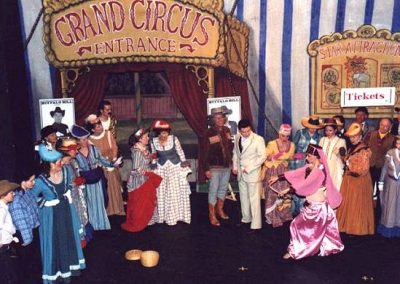 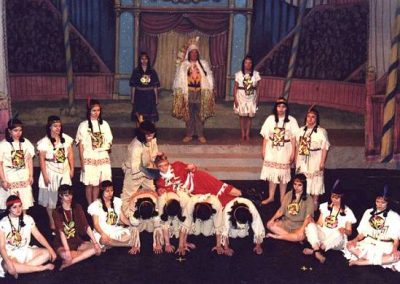 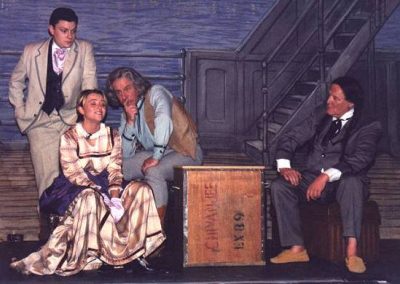 The deck of a cattle boat

I Got the Sun in the Morning