However much the characters may bubble, it is hard to warm to a show set on a big stage with no drapes and no backcloth to soften its sharp edges. So the company has an uphill fight from the start – although the emptiness works because it concentrates the mind on the happy coquetry of Alison Adams, startlingly charged with opening the evening on her own.

In the title role she packs humour, gentleness and an ability to belt out her numbers. Her crisis in the lift, in which Julian Wilson’s claustrophobic panic is guaranteed to tickle every rib in the house, is the show’s big sustained comic interlude.

Tony Jay (Herman) also scores splendidly as he romps his way through I Love To Cry At Weddings, and Elizabeth Bird (Nickie) comes dynamically to the fore in There’s Gotta Be Something Better. John Hall (Vittorio) is also in good voice, but he is not best placed to deliver his only number, lying on a bed with his feet towards the audience.

It was laughs a plenty at the Palace Theatre last week as the audience watched the trials and tribulations of Charity Hope Valentine hoping to find a better job and a man who wasn’t a rat. It must have been particularly difficult for Redditch Operatic Society to follow the success of last year’s production, Annie Get Your Gun, but Sweet Charity was pulled off with the usual style for which this group is renowned.

Alison Adams was extremely well cast in the title role of Charity, a hostess at the Fan Dango Ballroom, who has a great singing voice and a flair for the American accent. Her sidekicks, friends Nickie and Helene, played by Elizabeth Bird and Penny Hoy, made a good duo. Elizabeth Bird had a strong stage presence and her character some of the best lines in the show, alongside Charity.

John Hall also has a fantastic voice in his role of movie star Vittorio Vidal, who invites Charity back to his apartment one night after a tiff with mistress Ursula March, played by Rosalyn Chalk.

Julian Wilson, who played Charity’s love interest Oscar Lindquist, was another favourite, particularly the scene in the YMCA lift, in which Oscar and Charity meet, and Oscar has an attack of claustrophobia.

The production contained all the well know songs such as Big Spender, The Rhythm Of Life, and If My Friends Could See Me Now, which was a real show-stopper and superbly performed by both the cast and orchestra.

No doubt fans will be eagerly awaiting next year’s big production, The Pirates of Penzance.

Society’s show is so sweet

This is an ambitious musical demanding strong principal voices and clever stage management to cope with the variety of music and difficult stage settings.

The ROS rose to the challenge very well. The main characters were excellent, especially Alison Adams (as Charity) who hardly left the stage. She acted the part of a cheeky dance hall hostess with conviction and performed numerous solo pieces, the most enjoyable of which was If My Friends Could See Me Now, which earned rousing applause.

Another excellent musical interlude was The Rhythm Of Life, performed by Mark Williams (as Daddy Brubeck) and supported by the company. Both the complex harmony and quick tempo showed the cast in their best light. There were a couple of occasions when the acting was a little wooden, but the enthusiasm of the singing more than made up for this slight shortfall.

The society had opted for a minimalist approach to the scenery, but teamed with clever lighting and a variety of props, the scenes were set realistically. The Ferris wheel and lift scene were particularly clever. And the orchestra was bright, lively and just the right volume for the voices to be audible. A really enjoyable performance.

An excellent production from Paul Jones and wonderful performances from all the cast gave us a marvellous evening’s entertainment.

Alison Adams (Charity) brought all the humour and pathos demanded by the role so that we really wanted a happy ending for her. There were a few tears in the audience when Julian Wilson’s ‘Oscar’ cruelly broke her wedding plans. Both were truly memorable performances.

Penny Hoy (Helene) and Elizabeth Bird (Nickie) and all the other hostesses and principals were also excellent. The showstopper for me was I Love To Cry At Weddings superbly led by Tony Jay’s ‘Herman’.

Dance routines were wisely kept simple as it was obvious that this was not a ‘dancing cast’ but this in no way detracted from a first rate show, which will be hard to follow.

Well, this one was different! Director Paul Jones did away with practically every aspect of scenery (with a few exceptions such as a bed, a closet and fairground ride chair), and worked with a stark white stage. Colour was provided by the dazzling costumes and the lighting.

The show is not quite as well known by the public as many others, but in Big Spender, The Rhythm Of Life, Baby Dream Your Dream, There’s Gotta Be Something Better and If My Friends Could See Me Now you’ve got some of the greatest songs in musical theatre.

The show is very suitable for a large company like ours, with eight major roles plus eight (or more) hostesses and numerous other small parts for the company. The limitations of the Palace Theatre stage were not a problem either, since most of the company numbers (with the exception of The Rhythm Of Life) only required a proportion of the chorus at any one time.

Technically, the show was difficult, and hitches and problems continued throughout the week. For example, a projector was supposed to beam story lines onto the back of the stage, but only worked very briefly during one of the five performances. These problems, whilst apparent and annoying to the cast did not seem to detract from the audience’s enjoyment of the production. Indeed, we have had a great deal of praise for the show, and for Alison Adams (Charity) in particular, even though the audience may have been split between those who like a bit of scenery and those who thought the ‘minimalist’ approach worked.

This is the story of Charity Hope Valentine, a girl who just wants to be loved…

As the show opens, we see Charity dancing through the park, carrying her shoulder bag and with a heart tattooed on her arm. She is meeting her boyfriend, Charlie. She is smitten with him, and has taken her savings from the bank in order to buy furniture for their love nest together. On seeing the money, however, Charlie pushes her into the lake and steals her bag.

The passers-by discuss the apparent drowning, but are reluctant to do anything at first. Finally they haul Charity out of the lake and the cops arrive. Charity tries to convince everybody, including herself, that Charlie didn’t mean to do what he did.

She continues this story at the Fan-Dango Ballroom, where Charity works as a hostess. The girls, especially her best friends Nickie and Helene, are sceptical since they’ve all heard this kind of thing before. Herman, the manager, pops his head round the door, telling them it’s time for work. The hostesses then begin their usual routine trying, languidly, to persuade customers to dance.

On a New York street, after work, Charity gives money to every beggar until she has none left for herself. Just then, film star Vittorio Vidal rushes out of the smart Pompeii Club in pursuit of his beautiful mistress, Ursula. He bowls Charity over in more ways than one. Ursula refuses to go back inside with Vittorio, so he promptly takes the eager Charity inside instead.

Inside the club the dancers go through their routines, and Charity sits down with the film star to everybody’s astonishment. Vittorio just wants to talk about Ursula, but Charity manages to steer him away from the subject. Not having eaten since breakfast, Charity faints and Vittorio takes her to his apartment to lie down.

Whilst on Vittorio’s bed, Charity admits that she’s a dance hall hostess, putting it down to ‘the fickle finger of fate’ – one of her favourite expressions. Vittorio is struck by her humour and honesty. Totally starstruck, Charity asks for a signed autograph to prove to the girls that she really was in his apartment. While he fetches props from his old movies for further evidence, she sings happily, but then Ursula returns unexpectedly to apologise for her jealousy.

Charity quickly hides in the closet, taking food and drink in with her. Ursula apologises to Vittorio, and he sings a love song to her. They fall asleep, with Charity still hiding in the closet. She creeps out the following morning, and returns to the ballroom.

In the Hostess Room the girls at first disbelieve her story. Then they are cross that she didn’t get anything more out of the film star. Nickie, Helene and Charity all sing about getting out and finding something better to do, until Herman brings them back down to Earth. Just then, Charity decides that she’s going to better herself and determines to find a bit of culture.

At the YMCA, Charity goes to enrol for a night class, and follows a nice looking gentleman into the lift. Suddenly the lift breaks down, and Charity is stuck with the shy, panicky man, who she learns is called Oscar Lindquist. During the course of their predicament, Charity learns that Oscar isn’t married, and they get to like each other.

When they are released, Oscar invites Charity to the Rhythm Of Life Church, which is holding its unorthodox meeting in an underground car park. After the meeting, a police raid disperses the crowds, and they catch the subway home. Oscar suggests another date, and dubs her ‘Sweet Charity’.

Whilst at Coney Island a couple of weeks later, Charity and Oscar get trapped again, this time on a ride. Charity is scared, but Oscar reassures her. She still doesn’t tell him what her real job is, but she is determined to come clean and finally leave the hostess business.

At Barney’s Chile Hacienda, Charity meets Oscar again and finally plucks up the courage to tell him what her profession is. Oscar already knows, however, and he doesn’t care. He professes his love for Charity and asks her to marry him. Charity is ecstatic, packs her suitcase and returns to the ballroom to say her goodbyes. Herman, together with the hostesses and the customers, throws her a going away party, and she and Oscar leave covered in confetti.

Has Charity finally met the man of her dreams?

Book by Neil Simon. Music by Cy Coleman. Lyrics by Dorothy Fields.
Based on an original screenplay by Federico Fellini, Tullio Pinelli and Ennio Flaiano.
Produced for the Broadway stage by Fryer, Carr and Harris.
Conceived, staged and choreographed by Bob Fosse.

By arrangement with MusicScope and Stage Musicals Ltd of New York. 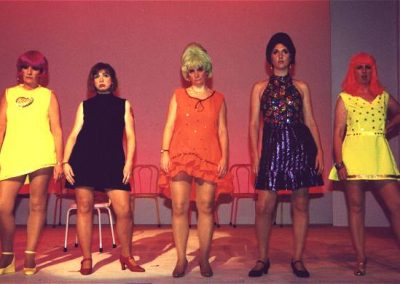 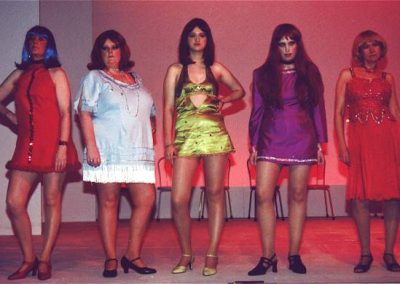 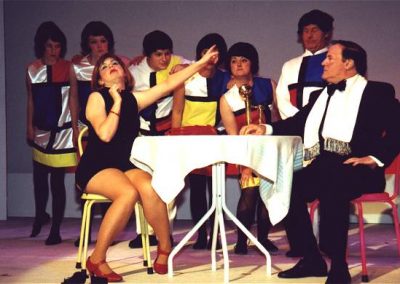 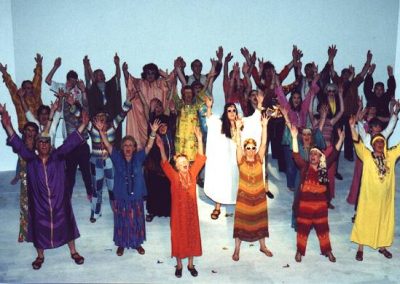 The Rhythm of Life 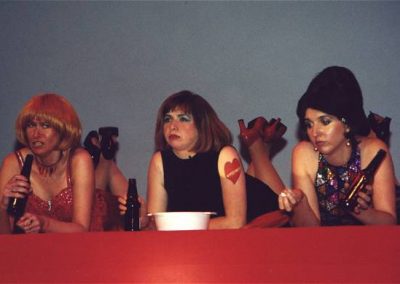 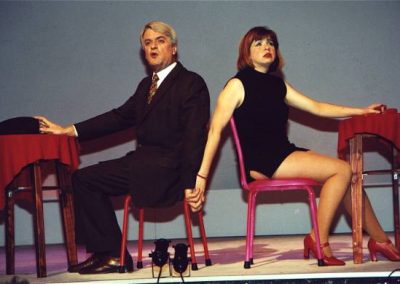 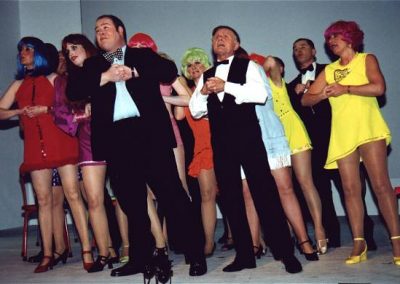 I Love to Cry at Weddings 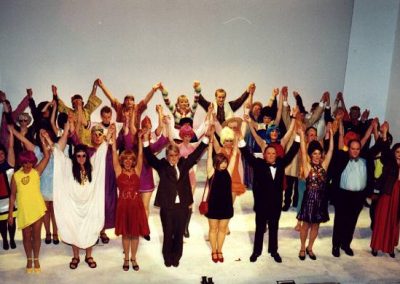