The Pirates of Penzance (Broadway Version)

You will have to travel a very long way to find a Major-General with more verbal dexterity than Tony Jay. He comes cherubically to the challenge of G&S patter and he triumphs magnificently.

The production also has in Sophie Grogan a Mabel with a voice of silvery magic, and a central core of leading characters who slot seamlessly into the joyous romp. But when the chips are down and it is time for some serious choral singing, this is a company that hits the heights. Its Hail, Poetry! is spinetinglingly superb.

This is The Pirates, Broadway-style, so there are lots of liberties. Generally, they work, but the panto-type songsheet is a needless intrusion. This is an evening to cherish.

All praise for the Major-General

All praise for the best Major-General Stanley I have seen for years, if not ever, professional or amateur.

I found Tony Jay the multi-syllabic master of his chatter song in The Pirates of Penzance which he performed with great rapidity and then part-repeated even faster and just as faultlessly.

I was so impressed that I went to Redditch Operatic Society’s production the following night as well.

This Broadway romp was a bold and colourful foray into the world of Gilbert and Sullivan with some truly breathtaking voices which wouldn’t be out of place on a West End stage. The society is renowned for pulling out all the stops for their autumn performances and this year was no exception – the presence of Queen Victoria watching the shenanigans from the royal box proved it was a royal production in more ways than one.

The vocal talents of Sophie Grogan as the Major’s youngest daughter, Mabel, were outstanding. Tony Jay also gave an impressive performance as Major General Stanley and didn’t once get tongue tied in I Am The Very Model of a Modern Major General – a remarkable achievement considering the speed of the song.

And some great comedy moments accompanied the songfest – a particular favourite was young apprentice pirate Frederic (David Steele) who got the maidens’ hearts a-fluttering with his Elvis-style impersonation, complete with spinning glitterball and disco effect.

Mark Williams as The Pirate King, Ron Munro as his lieutenant Samuel and pirate maid Ruth, played by Julie Keeley, also gave very strong performance. All in all, a great evening’s entertainment.

Slow start to a great production

Headlined as a rollicking, rip-roaring romp, this show was slow to get off the ground. But the stage was eventually set on fire when young Sophie Grogan as the Major’s youngest daughter Mabel swept onto the stage during Oh, Is There Not One Maiden Breast. The 18-year-old’s confidence and crystal-clear voice was delightful to behold, and lit up the whole production. For someone so young, her stage presence was astonishing and singing ahead of the rest. Sophie obviously has a bright future ahead of her, and it was great to see the younger members shining through.

The male star was undoubtedly the irrepressible Tony Jay as the larger than life Major General Stanley. With fabulous singing and superb timing, Tony’s presence was a welcome sight indeed. And his rendition of I Am The Very Model Of A Modern Major General was breathtaking, for him and the audience!

David Steele as young apprentice pirate Frederic was charming and a handsome singer, while cheeky Mark Williams as The Pirate King was a great mover with some well-worked facial expressions.

A policeman’s lot is not a happy one, but Sergeant of Police John Baker did a commendable job of leading his band of comical cops around the stage.

And of course, as with any G&S production, the orchestra had to play its socks off, this time under the capable baton of Norma Kift.

A very imaginative production successfully used a large chorus of all ages in a show which normally is a vehicle for a younger cast. The first act was lively and very satisfying but the second act ground to a halt with the pantomime performance (audience participation) of When A Felon. It was completely out of place and self indulgent, detracting considerably from an otherwise excellent show.

A very good cast well led by ‘Pirate King’ and ‘Frederic’, excellent costumes and orchestra and some innovative touches (Queen Victoria watching the show from one of the boxes was particularly appealing) gave us a show full of colour and overall enjoyment. Pity about the panto sequence.

This show was an absolute blast! Everything seemed to fall into place, and the week was wonderful for all the cast and crew. We haven’t seemed to have such a happy show for ages.

Producers Tony Lacey and Bev Hatton made full use of the liberties allowed in the ‘Broadway’ version, and added loads of laughs and clever touches throughout the production. This was certainly a different version to the original, and benefited hugely from their ideas.

The costumes were wonderfully colourful, many of them made especially for this production, and the two-set scenery added to the overall class of the production, as did the excellent use of lighting and the clear sound system. The orchestra, once again under the directorship of Norma Kift, were superb, especially considering the speed at which some of the songs were played!

Due to the nature of the story, Pirates usually requires a large male chorus, since they make up both bands of Pirates and Police. Since our society has so many females, Tony and Bev had to find ways to include them in the action. The solutions included three of our ladies donning eye patches and becoming pirates throughout, others becoming bathing beauties or Victorian ladies, and many of them turning into police in the second act. It all seemed to work wonderfully.

The evening started with an introduction for Queen Victoria, who sat and watched the show from the royal box throughout, until her own appearance on stage just before the finale.

Right from the outset, we thought this show was going to be very successful for us, and therefore decided to add a Saturday Matinee performance. We wondered if this was a good idea when we opened on the first Tuesday to a relatively small, but enthusiastic, audience of around 50%. However, the remaining evening performances were blessed with near sell-out audiences, and even the Saturday Matinee seemed pleasantly busy!

Overall, this show will be remembered by many as one of the best weeks the Society has had. Feedback from our audiences, and the reviews (see above) from the newspapers certainly bear this out.

It is 1873, and that notorious band of sea rovers, the Pirates of Penzance, are drinking the health of Frederic who, on reaching the age of twenty-one, has completed his apprenticeship and is now expected to become a full-blown member of the pirate gang.

Frederic, however, has other ideas! It turns out that Ruth, his nursery maid, mistook the word ‘pirate’ for ‘pilot’ many years ago, and took Frederic to join the completely wrong profession! Having done his duty by completing his apprenticeship, Frederic now intends to rejoin law-abiding society and lead a blameless life. Furthermore, to atone for his disreputable past, his first act would be to exterminate the pirate scourge, even though he loves each of the pirates individually.

The dashing Pirate King surprisingly has every sympathy with Frederic’s intentions, but declines to rejoin polite society. Frederic’s last act as a dutiful pirate is to explain to the group why they are so unsuccessful as pirates – it turns out that their sympathy for any fellow orphans has got about, and all potential victims now claim to be orphans and thus immune to the pirate’s advances.

As Frederic leaves, Ruth begs to be taken with him, and tries to persuade him that she is beautiful compared with other women. He is about to agree to their union when a bevy of beautiful young girls suddenly appear and Ruth is rejected. The girls are initially horrified to learn that Frederic has been a pirate, but are quite captivated by his charm and good looks. The youngest girl, Mabel, is particularly taken with him.

All of a sudden, the pirates reappear and capture the girls, with matrimonial intentions in mind. This is thwarted by the sudden appearance of Major General Stanley, the girls’ father, who persuades the pirates that he is an orphan and therefore gains their sympathy. Ruth also reappears and pleads her love to Frederic, but he decides to return to law abiding society with Mabel.

The second act is set in Tremorden Castle, the home of the Major General, who is being consoled by his daughters as he bitterly regrets the lies he told in order to deceive the pirates. Frederic, however, is still resolved to exterminate the pirate gang, and has organised the local constabulary to this end. These gallant heroes, however, prove to be somewhat timidly inclined, and do little to inspire the girls’ and the Major’s confidence.

Before Frederic can leave with the expedition, the Pirate King and Ruth reappear and surprise him by pointing out that he was born on 29 February – making him a leap year baby, and as such he has really only had five birthdays instead of the twenty-one he thought. This means Frederic is still bound by the terms of his pirate apprenticeship, and his sense of duty means that he must return to the pirate fold, much to Mabel’s distress.

The Pirate King, on hearing Frederic tell of the Major General’s earlier deception, swears vengeance and decides to attack Tremorden Castle that very night, not knowing that the police have been called to arms. In the ensuing battle, the pirates manage to overpower the bumbling police, and are about to exact their revenge when the Sergeant reminds them of their allegiance to Queen Victoria, who makes a surprise guest appearance.

The pirates yield at once, and are about to be taken to justice when Ruth discloses that they are all really noblemen who have gone wrong. This revelation invokes the Major General’s pardon, and he happily gives his permission for the pirates to marry his beautiful daughters, and Mabel is happily reunited with her beloved Frederic…

A new version of Gilbert and Sullivan’s The Pirates Of Penzance, as presented on Broadway by New York Shakespeare Festival. Produced by Joseph Papp. Directed by Wilford Leach. Musical adaptation by William Elliott. Choreography by Graciele Daniele.

By permission of Josef Weinberger Ltd on behalf of Music Theatre International of New York. 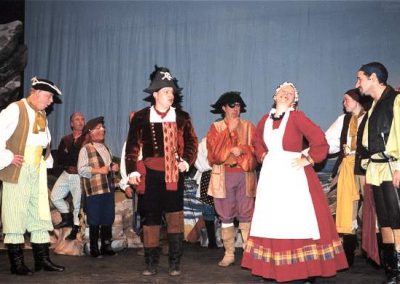 I am a Pirate King! 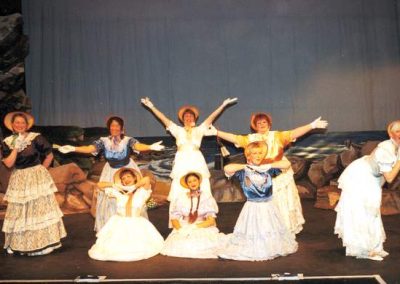 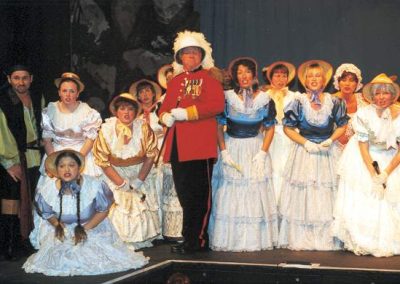 I am the Very Model of a Modern Major General 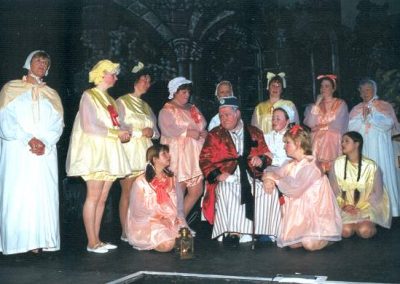 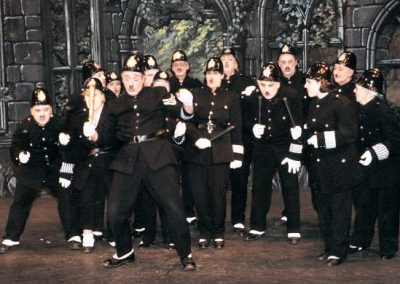 When the Foeman Bears His Steel 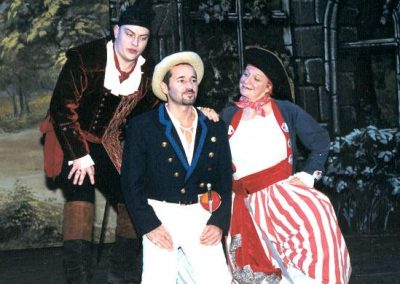 When You Had Left our Pirate Fold 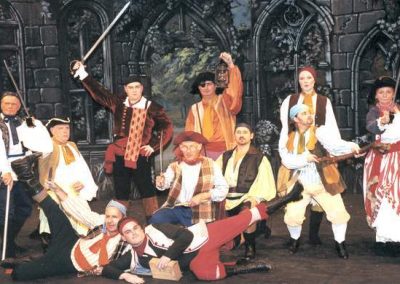 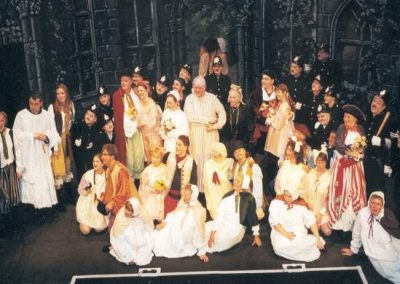