The voice of Malcolm Roberts (Emile) is the outstanding individual contribution to a production that provides a pleasing evening without threatening to set the town alight. His This Nearly Was Mine makes compulsive listening.

Joy Hatt is a lively Nellie and Nigel Buckley an engaging Luther Billis – although it is doubtful whether, even on this free-and-easy South Pacific island, a storeman would have clapped an arm around a lieutenant’s shoulder and patted him on the cheek.

Steve Sidaway (Lieut. Cable) and Val Archer (Bloody Mary) are among those who make reliable contributions in a workmanlike company. Vicky Prosser is a delightful Liat.

The nurses have somehow assembled an array of distinctly non-military footwear – and that shower of Nellie’s does not carry conviction or, apparently, water. But the overall effect of Kevin Hirons’ production is pleasing, with Norma Kift directing the substantial orchestra.

South Pacific is one of those proper musical shows with an abundance of sing-along numbers that are very well known, all of which are anticipated throughout the show. And the Rogers and Hammerstein classics set in the Second World War in the South Pacific were staged delightfully by the Redditch group.

The story follows the up and down love affair between the Navy’s ensign Nellie Forbush (played by Joy Hatt) and suave French plantation owner with a secret, Emile de Becque (Malcolm Roberts). Roberts is an experienced performer and this shows with his easy going rendition of wonderful songs, including Some Enchanted Evening and This Nearly Was Mine. He could almost have been French!

Joy’s excellent contribution also as an experienced chorus member shone through as she sang with Roberts and alone with A Cockeyed Optimist and with others in the delightful I’m Gonna Wash That Man Right Outta My Hair and A Wonderful Guy.

It was also lovely to hear some of the other well known songs, including There Is Nothing Like A Dame and Bali Ha’i whilst Bloody Mary’s (Val Archer) rendition of the fantastic Happy Talk was a highlight of what was an altogether superb show.

ROS were lucky in having a substantial orchestra to accompany them, and while the course of true love rarely runs smooth, all turns out okay in the end as Nellie and Emile separated by reasons of war and conflict are reunited in a touching moment.

It is always a pleasure to visit this welcoming and hospitable company and the sell out audiences will not have been disappointed with this production.

Emile and Nellie performed and sang well but somehow lacked the chemistry to convince as lovers. Bloody Mary was outstanding and together with Luther Billis extracted all the humour from their roles. Cable struggled somewhat with his high notes but the children Ngana and Jerome were most appealing. The chorus was strong as always, if a little on the mature side. Lighting, sound and costumes were of a high standard.

With this show, we were delighted to return ‘home’ to the Palace Theatre after its closure for an extensive refurbishment – but none of us would honestly have thought that South Pacific would provide us with our most successful show ever! Despite the increase in capacity, as a result of the renovation of the theatre, we achieved a near sell-out for our six-performance run.

Just why was the show so successful? We asked ourselves the same question, and believed it was down to a number of factors: the increase in profile of the theatre after its refurbishment; the undoubted success of our marketing activities; the popularity that South Pacific still has with the public, even after all these years; and the number of people in the company. All this resulted in a fabulous run that resulted in the (virtual) House Full sign night after night.

We were delighted to welcome Kevin Hirons back to the Society, this year, as Director. Kevin has appeared in many leading roles for ROS and other societies over the years, and has been directing since 2001. He has already received recognition from NODA, accepting a regional award for Best Musical in 2004 for The Scarlet Pimpernel. Together with Norma Kift, our Musical Director, we knew that the production couldn’t be in better hands.

We had a very large company for the show, with 54 names in the cast list. Unfortunately, South Pacific is an unusually paced show, with only two or three real songs for members of the chorus. The men, who don’t appear until more than 20 minutes into the show, have Bloody Mary and There Is Nothing Like A Dame. The ladies don’t get on stage for the first hour. Then, they have I’m Gonna Wash That Man Right Outta My Hair and A Wonderful Guy. Other than the opening sequences of Act II, with The Thanksgiving Follies and Honey Bun numbers, there isn’t that much else in the show for the chorus to do.

The leading roles of the show were not, generally, taken by our ‘usual’ principals. Members of the audience commented that it was “nice to see new faces”. Joy, Nigel, Vicky, Steve, Nick and Ron have all been with the Society for some time, and many had featured parts in Happy As A Sandbag and recent concert tours, but this was the first principal role for many of them in one of our major shows. Val Archer, of course, has many years experience acting and singing, and taught our entire company to tap-dance for 42nd Street in 2004, but was again making her principal debut for ROS. Finally, we welcomed Malcolm Roberts into the company, to take the leading part of Emile de Becque.

Everyone involved in this production was really enthusiastic during the week of the show, particularly when we began to hear of the buzz being generated at the box office. It was a really happy week backstage, and everyone’s excitement is continuing to build as we look forward to our next visit to the theatre – with Jekyll & Hyde in 2007.

Meanwhile, the restless sailors of the Navy, led by the entrepreneurial seabee Luther Billis, are bored with the lack of action and the absence of any ‘dames’. Bloody Mary, the native souvenir dealer who makes money by selling souvenirs to the GI’s, tells them of the pleasures that can be found on the mysterious island of Bali Ha’i.

Lieutenant Joe Cable of the Marine Corps arrives on the island to take part in a dangerous spy mission that might help turn the tide of the war against the Japanese. As only officers can sign out boats, Billis takes this opportunity to be able to get over to Bali Ha’i, and convinces Cable to accompany him. On Bali Ha’i, Bloody Mary decides that Cable is suitable son-in-law material, and introduces him to her daughter, Liat. The two soon fall in love.

The senior officers on the island, Captain Brackett and Commander Harbison, wanting to know more about Emile de Becque, ask Nellie to find out more information for them. Nellie is not keen to do this, due to her feelings for the plantation owner. However, when Nellie learns that Emile has two children, the mother of whom was an island native, she refuses his proposal of marriage finding she is unable to deal with the prejudices with which she was raised. Similarly, Lt Cable is unable to marry Liat due to her race, which infuriates her mother who has already been making plans for the couple.

Dejected and with nothing to lose, Emile and Cable agree to go on a dangerous mission into enemy territory, and successfully start returning reports on enemy action. The military operation gets underway in earnest, and the previously idle sailors, including the reluctant Luther Billis, are sent into battle. In an awful turn of events, Cable is killed during the mission, and Mary realises that her dreams for Liat have been shattered.

Nellie understands that life is too short not to seize her own chance for happiness, and confronts and conquers her prejudices. Despite believing that Emile may suffer the same fate as Joe, her love for him is so strong, that she becomes a mother to Ngana and Jerome, his two children, whilst hoping in her heart that, one day, Emile will return…

An amateur production presented by arrangement with Josef Weinberger Ltd on behalf of R&H Theatricals. 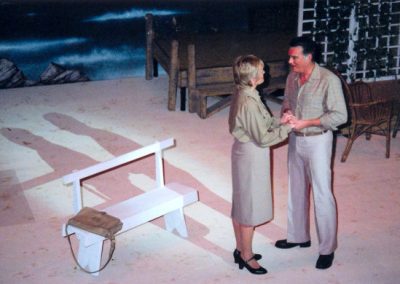 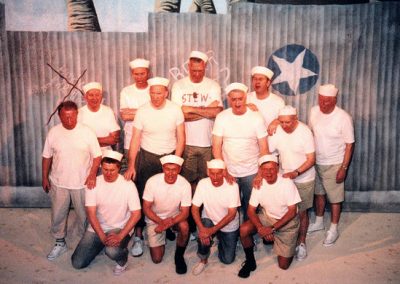 Bloody Mary is the Girl I Love 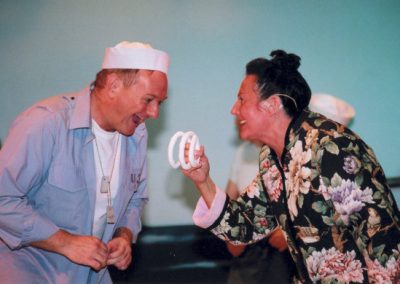 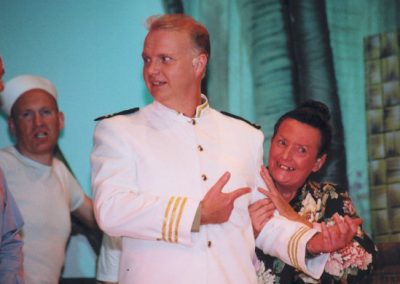 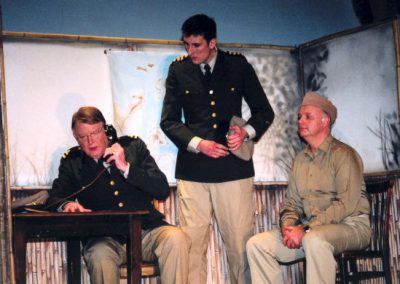 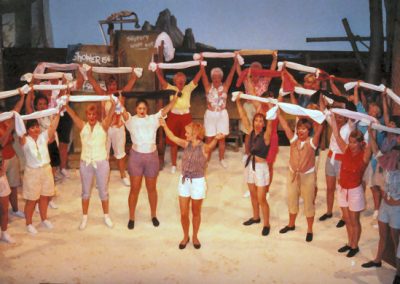 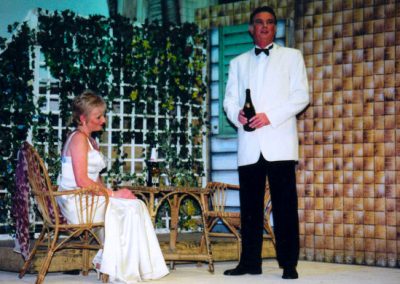 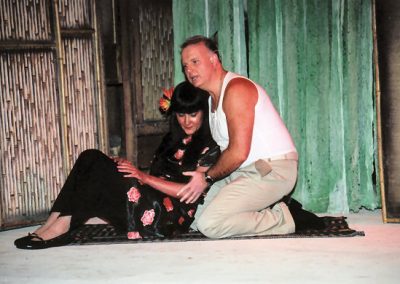 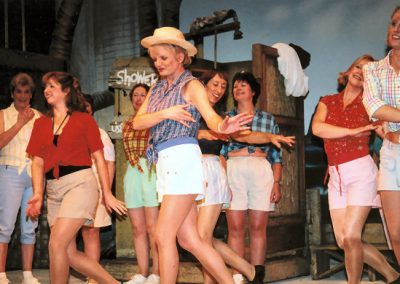 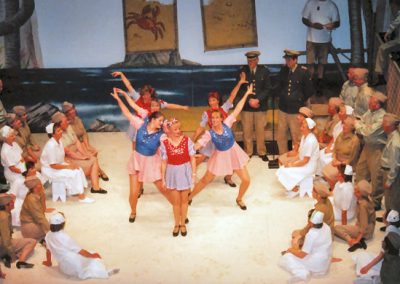 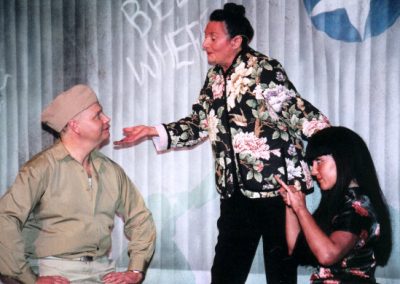 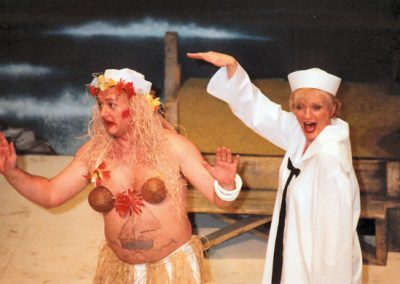 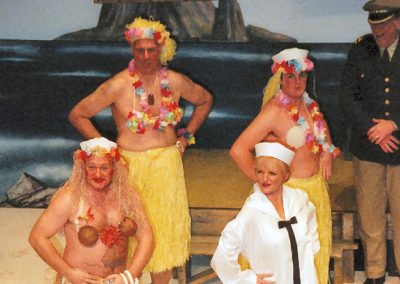 A Hundred and One Pounds Of Fun 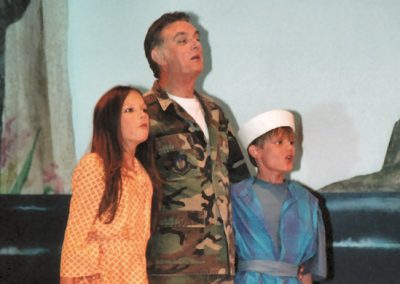 Malcolm Roberts with ‘Ngana’ and ‘Jerome’ 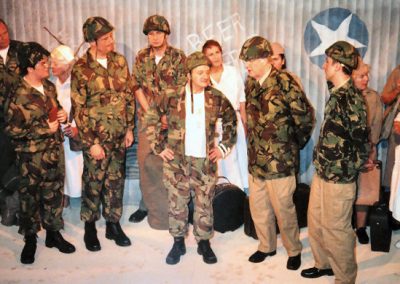 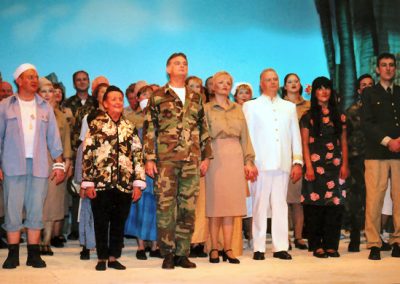