The Best Little Whorehouse in Texas

A great night out

I love this ‘Country and Western’ musical and fully enjoyed this production. A well narrated opening from Nigel Buckley got the show off to a lively start. The music alone is worth the admission money.

All the numbers in the show are evocative, particularly the last two ‘Hard Candy Christmas’ (The Girls) and ‘The Bus From Amarillo’ (Mona) as the Whorehouse is closed.

Fine performances from all ‘The Girls’, ‘Aggies’ and ensemble. A great night out. Yeehaa.

They certainly broke the mould when this was penned, and quite frankly, ROS took a huge risk when deciding to stage it, not least of which was for the reason that it simply isn’t a family show, a fact that many societies rely upon for their very success.

The semi-naked women (and of course the wholly undisguised subject matter) were one thing, but the dialogue contained more expletives than a helping of Friday Night with Jonathan Ross, much of which seemed gratuitous and unnecessary and one got the impression the cast were not entirely comfortable with this aspect either.

Now we’ve got the subject of whether even selecting this show out of the hundreds that could have been staged was an inspiration or not, let’s talk about execution.

ROS are one our thoroughly reputable and ‘professional’ local operatic societies and always put on a quality show, and, given what they had to work with, this was no exception.

Elizabeth Bird as whorehouse top bird was delightful, while Tony Lacey as crude Sheriff Ed Earl Dodd was suitably slobby and laid back as only a Texan cop could be. Mark Williams as the exuberant TV presenting do-gooder Melvin P Thorpe was superb and a shining star in this show, while a relatively short showing from the brilliant Tony Jay as The Governor was, as usual, captivating.

No disrespect to the more mature members of the cast, but it’s always good to see a good crop of youngsters coming through, and ROS seem to have the correct mix right now.

One final thought – this show was certainly different to others, right through to the very end it would seem, as the curtain came down on an unhappy, and one could almost say, rather unsatisfactory ending, leaving many feeling cheated out of that traditional happy scene. Risky business this show, and while well performed by the cast and musicians, I’m not so sure the risk was worth taking.

You can’t please all of the people all of the time, as can be seen in the review from The Standard above. But we believe it is important to take a risk at times, and there are so many great shows that just don’t seem to be performed as often as others. The Best Little Whorehouse In Texas falls into this category – it simply isn’t seen as often as your Rogers and Hammerstein’s, etc, so people are not as familiar with either the story or the show.

But it is a great show, based on a true story – hence the non-traditional and non-happy ending. In real life, the Chicken Ranch brothel was forced to close after a crusading TV evangelist got ‘on the case’, and it makes sense for the musical version to try and tell the same story.

The cast had a great time during this production, with many laughs throughout rehearsals, and we all had a really enjoyable show week.

Paul Hutton returned to direct/choreograph the show after a break of eight years (Paul was our director for 2000’s Sweet Charity and 1998’s Me And My Girl), and kept the whole cast (and some of the crew!) on their toes, providing them with plenty to do. The ensemble of ‘girls’ in particular have some terrific numbers, and the choreography added to their contributions as much as their great songs. The orchestra, once again conducted by our Musical Director Norma Kift, made a terrific sound for such a small group (six in all).

The show didn’t set the box office alight, but did respectable business at around 67%. Whether this was down to our marketing efforts (doubtful, since we’ve pretty much got those down to pat), the unfamiliarity of the show for many people, or the start of the recession we simply don’t know, although it is probably a combination of things.

Nevertheless, ROS once again produced a well-crafted, superbly acted evening that was good value for anybody’s money. And another bonus was that we pulled together a great group of ‘younger’ members who we were delighted with, and who we hope will stay for future shows.

The narrator sets the scene, describing The Chicken Ranch, a small-town brothel in Gilbert, Texas, where the girls conduct their business transactions under the watchful eye of Miss Wulla Jean, the proprietor. That was the old days. Upon Miss Wulla Jean’s death the ranch was bequeathed to Mona Stangley, her favourite working girl, and things have stayed pretty much the same as ever. That is, until about a year ago…

Two new girls, Angel and Shy, arrive off the bus looking for work. Out-spoken Miss Mona quickly sizes them up and decides to take them on. She can use some extra girls since the winning Texas college football team are due here on Thanksgiving night to celebrate their victory. But she makes it clear that The Chicken Ranch is no ordinary whorehouse; Miss Mona doesn’t put up with any nonsense from her girls and there are rules to be followed. Angel will fit right in, but Miss Mona has doubts about Shy. Knowing she has no place else to go, she takes her in, giving her some advice along the way.

Meanwhile, at TV station KTEX, self-proclaimed do-gooder and watchdog of Texan morals, Melvin P Thorpe’s show is underway. Melvin tells the audience that he’s found evidence of an actual whorehouse operating in Gilbert, Texas. What’s more, it is operating under the protection of local sheriff Ed Earl Dodd. It is going to be Watchdog’s crusade to close down this abomination and stop the ‘loveless copulation going on’!

Back at the ranch we overhear a telephone conversation between Angel and her mama. It seems Angel has a young son at home, and she isn’t quite the tough nut she pretends to be. The preparations for the forthcoming football revelry continue, but Jewel, Miss Mona’s genial maid, is off to see her man for some good old fashioned lovin’!

Sheriff Ed Earl arrives in a foul mood because of the Watchdog show that has got the whole town talking. Mona tries to calm him down. She is sure that the fuss will soon blow over, but then the Mayor calls to say there’s a TV crew down at the courthouse looking for the Sheriff. It is Melvin P Thorpe and his Watchdog show, stirring up more trouble. He baits Sheriff Ed, who is caught on camera mouthing some old-fashioned Texas cuss words and firing warning shots in the air.

It is Thanksgiving morning at the Texas Twinkle Café, and the Mayor of Gilbert and his cohorts are outraged at Sheriff Ed’s TV performance, which has cast an unwanted spotlight on Gilbert and The Chicken Ranch. The Sheriff defends his actions, reminding them that Miss Mona is the biggest industry in the area. As the men bicker, Doatsy Mae, the waitress from the café, daydreams about what her life might have been like, if only she’d dared be a little less respectable.

At the big game, the Angelettes perform a routine, and the Aggies win the match. In their dressing room generous Senator Wingwoah gives the lads the good news – since they played such a great game, he’s treating them all to a night at The Chicken Ranch.

At the whorehouse the Senator and the Aggies are made very welcome, and the boys and girls quickly pair off. Sheriff Ed also pays a call, to check things are quiet. Suddenly, all hell breaks loose as the Watchdog crew, complete with cameras, burst in and film couples tumbling out of rooms in various states of dress, and undress!

Senator Wingwoah is also caught in the camera’s eye, but wriggles out of trouble as the Governor of Texas arrives. Unfortunately, not even the easy-going Governor can ignore the mounting pressure, and he announces that the ranch must close.

Miss Mona is philosophical. She’s learned not to expect anything out of life, and shares a moment together with Jewel. In his office, Sheriff Ed is resisting doing anything about the ranch, despite local pressure, but he has no choice when the Governor orders him to close it down.

At the ranch, the girls are packing up and leaving. Mona and Jewel are the last to leave, but not before the Sheriff bids his goodbye. He’s bitter about the outcome, but for Miss Mona it’s just the way life is. Finally, alone, she reminisces about the turnings her life has taken…

Book by Larry King and Peter Masterson.
Music and Lyrics by Carol Hall.

An amateur production presented by arrangement with Samuel French Ltd. 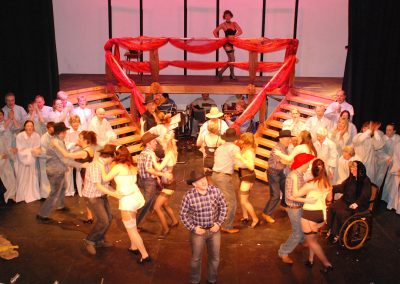 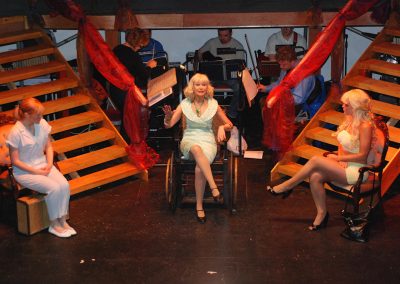 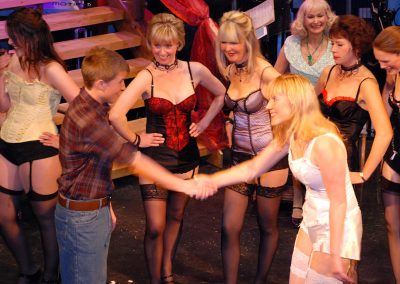 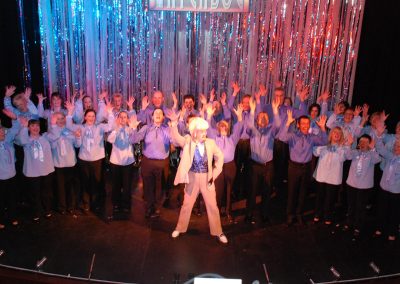 Texas has a Whorehouse in it! 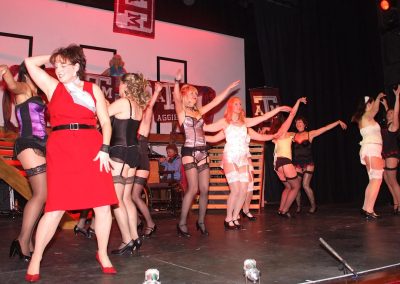 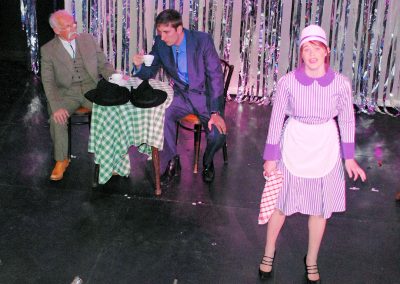 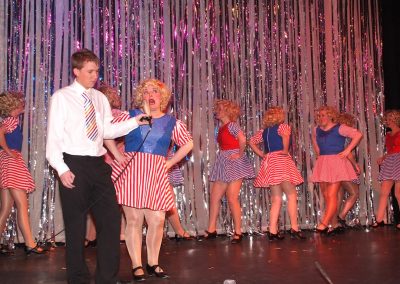 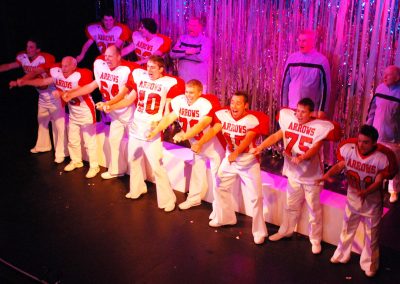 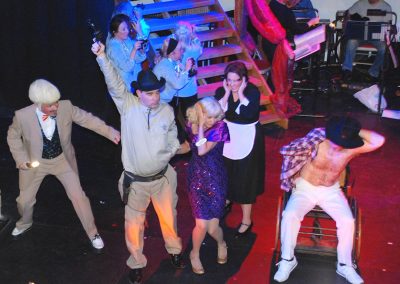 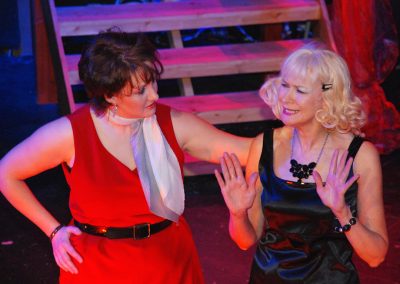 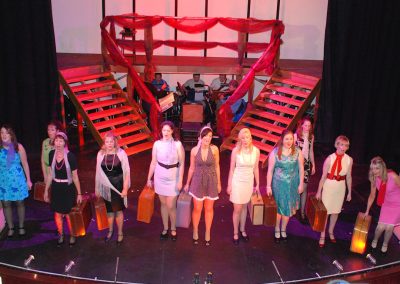 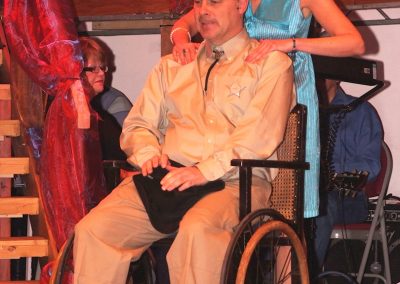 Miss Mona and the Sheriff 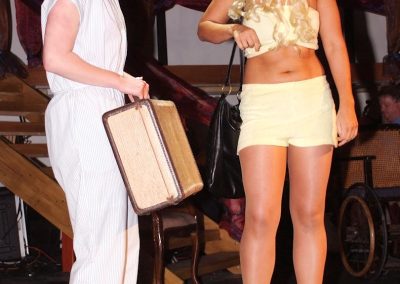 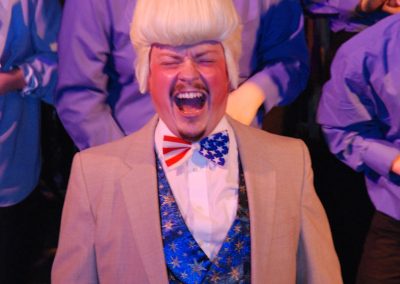 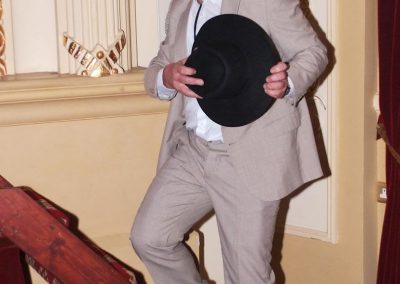 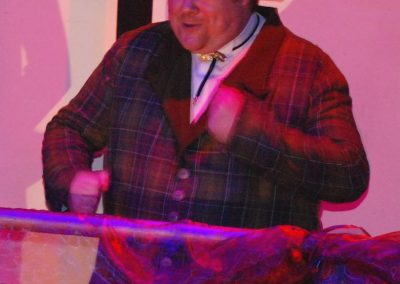